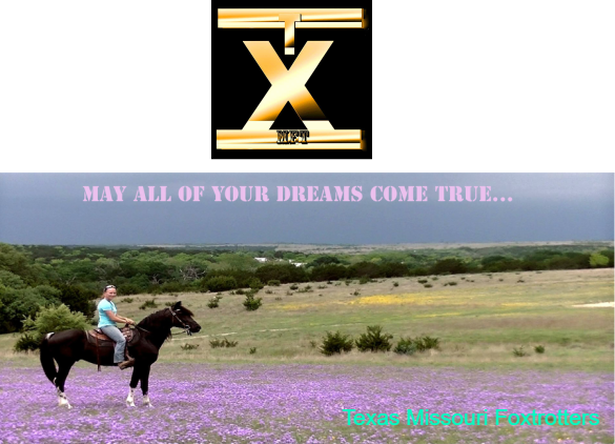 Please scroll down to view our horses, zebras or deer for sale - if they are no
longer listed on this page - they have been sold.

Ulrich Mystery Print is a 15.2 hand, 2016 Appaloosa Stud registered with ApHC. He carries one copy of LP, is homozygous for the PATN1 gene, and carries one copy of the DMRT3 gene for gait! He is foundation bred and carries the coveted  Ulrich name. He is clear on all genetic testing!
​You are not GUARANTEED spots, but have a 50% chance of your foal turning out with spots, he will NOT throw a varnish roan pattern, only spots or solid colors.  "Mystery" has a sweet, lovable disposition and is wonderful on the trails as is his daughter, Pepper. He is also like catnip to the ladies we turn him  out with - they won't leave him alone! He is Mr. Casanova for sure...

Don Ulrich bought leopard bred mares from the Timberline Ranch in Broadview, MT and the very last Navajos Candy colt, and he named him Ulrich Many Coups. Don's famous advertising jingles were "Appaloosa to Appaloosa, and the best to the best."  However he realized to continue with the Leopard legacy he needed to expand and enlarge the leopard gene pool dynasty by bringing in other famous leopard lines. Don visited Robert Taylor from Wolf Point, MT and bought Rakush, Ben Buzz and a Jims Ben Lowe leopard mare.  He also bought from Lee Warne's ranch in South Dakota, Sully's Butterfly which is the  Sundance 500 line. These new leopard blood lines plus the Timberline leopard lines, the Morgan leopard, the Simcoe Sarcee, and of course the Navajo Candy line, and a few other not well known leopard lines which all made up his breeding program.
Mr. Ulrich had noticed a little shuffle gait in a few of his Leopard horses and wanted to develop this trait in his herd.  He died before he ever figured out where the gait came from or how he could develop it in his horses. Pete Smith, Mr. Ulrich's trainer, told me he noticed this gait trait in Ulrich's Jungle Matt.From my research it was Morgan's Jungle Kitty that brought the gait trait into some of the horses in Ulrich's herd.
Interesting pedigree   Morgan's Jungle Kitty was by Sikanni Chief by Ranger Snip a registered Morgan. Many Morgans were gaited in the past. Sikanni Chief's dam was Kamiac Princess out of Kamiak Trixie, a full sister to Toby I, which brings in the Toby gaited genes.  Her bottom side was Morgan leopard. Also I contacted Carol Mulder who is an authority and historian on Arabians.  She told me that Alyf, a registered Arabian, was a strong ambler, and this stallion is prominent in Morgan Jungle Kity's pedigree. She said Alyf could gait without effort and could stay in gait beside horses doing a full gallop. This stallion was personally ridden by Carol at the famous Kellog ranch in Pomona, California. So you can see this gaited trait could have come from any one of these three sources or a combination thereof.

I believe in form and function.  Horses with broad faces, square muzzles, straight profiles, stocky body builds, lob ears, and almond shaped eyes, all translate to a calm, dependable temperament.  The traits above all fit the Ulrich horses to a "T".
​
Trail riding is the number one past time of most horse owners, and is the trend in the equine market.  Some of the pictures shown here are pushing and expanding what a Foundation  Ulrich Appaloosa can do.​ To learn more about the Ulrich horses reference my article, "Why not an Ulrich Horse?"

"Deacon" is a stunning example of the  old foundation lines that created this sought-after breed.  His bloodlines are  a who's who of legendary Missouri Foxtrotters - including - Sun Dust E.,  King James, Lady Anne F., Missouri Traveler E.,  Merry Boy Sensation, Golden Governor, Zane Grey's Cody Bill etc...
Deacon is 15 hands and 21 years old. He has a super-smooth, natural, 4 beat gait, fabulous foxtrot and easy canter. He is 6 panel negative and has two copies of the gait gene. We restarted him under saddle after not being ridden in over a decade and he went straight to riding with no fuss. This is one great minded stallion that sires amazing foals!
​We were lucky enough to find this amazing, naturally-gaited,  stocky, handsome fellow from none other than Dale Esther's  amazing granddaughter Ashley, who I consider our new, dear friend. We are beyond honored to help carry on their proud legacy of the best horses ever. 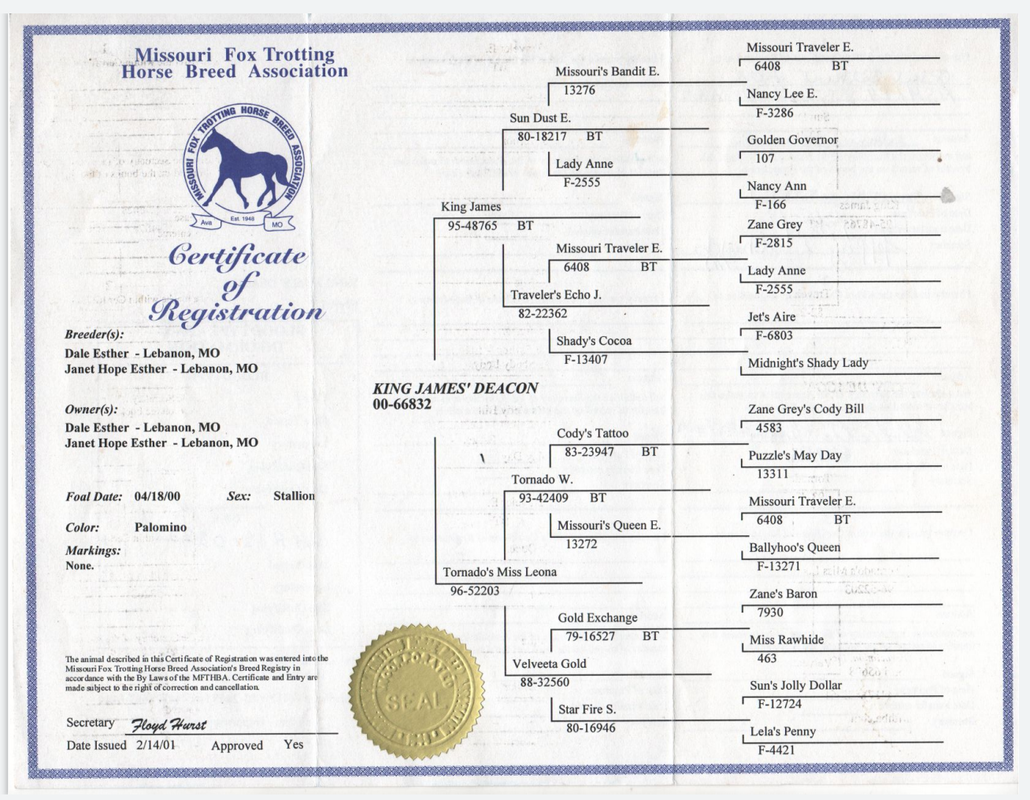 Some of Deacon's offspring below-

Article by Dale Esther, Deacon's prior owner and a MFTHBA legend.

Zane Grey
​
My wife, Janet, and I live in the house where I was born on a 600 acre farm that lays along Hwy 5 thirteen miles north of Lebanon, MO. My father was a cattle buyer who made a living from the back of a Fox Trotting horse from the turn of the century until roads improved in the 1930s. I started riding young and have a life long involvement with Fox Trotters.

Our Former Stallion
​&
Sire to Our Filly Silk

FRD Pure Luck's Sure Luck
**No Longer Standing at TXMFT**

Tucker is a  15.2 hand, registered MFTHBA and SSHBEA  stallion. He is tested homozygous for the tobiano gene and black gene which means he will throw color every time and never a red foal. So any Missouri Foxtrotter he is bred to can be triple-registered MFTHBA, SSHBEA & Pinto (PtHA). Any gaited horse (if not a MFTHBA) can be double-registered as SSHBEA and Pinto (PtHA). And any horse, even un-registered, can be registered as a Pinto out of him as he will ALWAYS throw spots.
He is also tested positive for the  "gait-keeper"  gene - he is AA - which means he carries 2 copies of the gait gene - the strongest you can have to potentially throw gait.

More videos of Tucker's gaits and his offspring...

His 10 year old son Splash foxtrotting...
How sweet his babies are...Winchester at a few months old.
April lying down as a yearling...
FRD Pure Luck's Sure Luck  "Tucker" is a     homozygous for tobiano and black MFTHBA & SSHBEA Stallion.  He is also tested positive for the AA gait gene     - which means he carries 2 copies of the gait gene - the strongest a horse can have to potentially throw gait. There is more information on his page about the gait gene and why you should have any stallion you are considering breeding to checked for this if you want a gaited foal.   FRD Pure Luck Sure Luck    produces very large foals and they are always spotted as he is tested homozygous for the tobiano gene and the black gene as well, so he will not throw a red gene even out of a chestnut mare.  He has produced two 16.3 hand horses out of 15 hand mares - ANY get, whether the mare is registered or un-registered, that Tucker sires, will be register-able as a Pinto (if not gaited) and both a Pinto and SSHBEA (if gaited).  Most of his foals are 14 hands at 1 year old.    All of his  foals have matured at over 15 hands, many 16 hands and some 16.3 hands with a stick. If you want big, colorful, smooth-gaited and gentle, he's your man! He is a lovely smooth-gaited trail horse with a fabulous, barefoot, natural  foxtrot.  His foals are so lovely that we have sold yearlings for $6,500 and some trained trail horses for 30,000. He is still producing wonderful, gentle, gorgeous foals and should be for many years to come. He pasture breeds, hand breeds easily and also AI's. He currently hangs out in his 20 acre pasture with mares and newborn foals and takes gentle care of all of them as well as people.  We don’t worry about guests going into his pasture to say hello - as he is the gentlest stallion we have ever owned.
designed by Great Trail Horse LLC - email kirsty@greattrailhorse.com
TXMFT.com
Great Trail Horse, TXMFT, MFTHBA, gaited jumping horse, horses for sale in Texas, MFTHBA stallion, Shaker's Jamaican Pride, Stallion at stud, MFTHBA stallion, MFTHBA stallion in Texas, World Champion Jumping horse,zebra for sale, zebra in tx, zebra for sale in texas, zebra in the house, angus for sale, donkey for sale, zonkey, zorse, kirsten klindworth, jumping foxtrotters